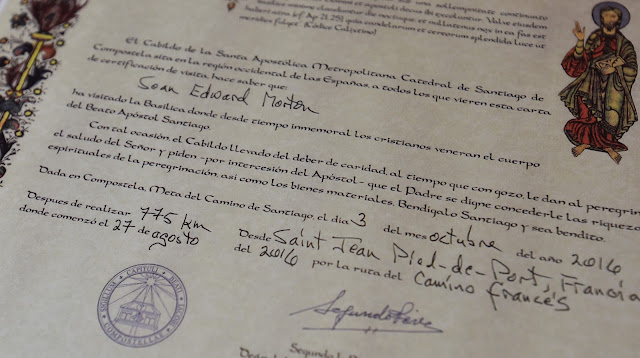 We have now been home back in Canada for almost a month. Home is wonderful, relaxing and welcoming for about two or three days. Then one night you wake up thinking (hoping?) you are still in an albergue, or your body becomes frustrated by sitting at a desk rather than hiking 20, 30 or 40 kms at a day and you begin to look up long distance hiking trails around the world and you realize (in the words of Robert Service) "you've become the worst of the worst" and you're hooked. You are a Camino addict and you begin the plan for next year's trek two weeks after having finished the "impossible task" of hiking 800 km. So here we are, and we have begun looking at a range of possibilities including the Camino Norte, the Portuguese Camino, or one of the routes through Frances (Le Puy and Arles are the front runners). However, with all of our planning and wishful thinking aside we also realized that we had some post Camino advice to pass along to anyone about to head off on their adventure. 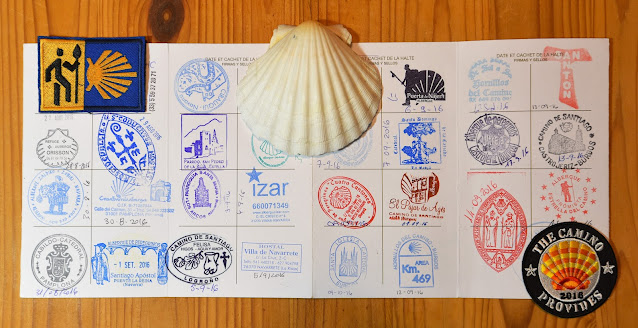 In terms of practical advice a few points stood out for us:

(1) The trains in Paris and France are listed by the time they leave and by their station of origin and final destination. Upon arrival to Paris we found this confusing as our train from Paris to Bayonne was listed as the train to Irun, with no indication of any of the intermediate stops. This initially made finding the correct train confusing for us being used to how VIA Rail and Amtrak stations list their trains.

(2) As we discovered, when you buy SNCF tickets - even if they are bought for a train route - it does not necessarily mean that the entire route will take place on the train. Sometimes, owing to a variety of factors, passengers can be switched to buses. Though we were shocked, and a little confused, the bus trip was perfectly comfortable and allowed us to have a little longer tour of the region which turned out to be great. So if you get put on an SNCF bus instead of a train - especially in the midst of one of France's labour disputes - trust that everything will work out.

(3) While ATMS are prevalent throughout Spain and along the Camino we had one difficulty for which there was no warning. Namely when we withdrew funds we could not pick which account (Savings or Chequing) to withdraw from. Similarly when we received our ATM receipt it showed how much was removed but not the balance left, hence we could not even guess which account it was coming from. As a result we ended up having to have family look into our account to ensure that the funds were coming from the right account. Just something to be aware of when you use Spanish ATMS.

(4) Perhaps one of the hardest things for us to get used to on the Camino was the timing of Spanish meals. Pilgrims need to be aware that dinner in Spain is between 7 and 8:30 and that this can be hard if you have had a small breakfast and a limited lunch on the go. In addition there is only a limited amoutn of fast food in Spain and it is usually found in the larger cities and certainly not in the smaller rural towns along the way. In other words, while there are fruit stands and cafe bars along the way, you also need to be prepared as it can lead to a long day if you are not ready to wait until 7 or 8 pm for your dinner. A note here, especially for North American pilgrims, the key to food in Spain is to visit bars. Bars in Spain, unlike Canada and the United States, are not primarily for dispensing alcohol. In Spain bars serve coffee, orange juice, breakfast, lunches, tapas, and of course beer, spirits, and wine. Hence bars in Spain are more like cafes and restaurants and therefore become the main go to for almost all of your daily needs while hiking. In particular along the Camino they also provide you with the chance to get more food, to rest, to recharge your devices, check your digital networks through wifi, and get your pilgrim stamp en route. Also notably bars are often one of the few things which are regularly open - early in the morning for breakfast, often during siesta in the afternoon, and late at night for sports games and drinking.

(5) While public water fountains are prevalent along the Camino and in Spain, when you go to a bar or restaurant for a meal things get a little trickier. At each meal in a public restaurant (not albergues) asking for a glass of water leads to the waiter informing you that you have to purchase a bottle of water. To us this did not seem to be a problem, however waiters often seem confused that anyone would actually buy water and strive to inform you that a bottle of water costs more than a bottle of wine and try to convince you to get wine instead. While we often did get a bottle of wine later with our meal, the task of explaining that we also wanted a bottle of water often led to a longer conversation at the outset of most of our meals.

(6) Finally, and while on the subject of waiters and waitresses, it seems that tipping wait staff in Spain leads to confusion on their part and often we found led to a large amount of animosity on their part towards you. Hardly a day went by when one of us was not yelled at for trying to leave a tip. 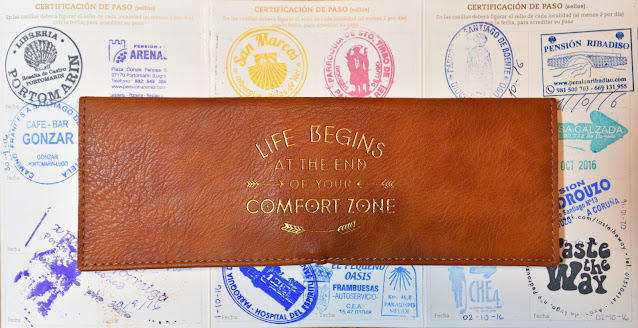 In addition to our specific practical advice we also felt that there was some more general guidance that we could pass along for those hiking the Camino:

(1) My first and perhaps most important piece of advice is, that when you think you want to give up (and you will think this), take a break, get a private room, get some sleep, and then hike on for at least two more days. By then either you'll be sure it isn't for you, or realize that it was just a hard day or exhaustion getting to you. Trust that we all get frustrated and disillusioned on the way, but that if you can get through that feeling you're in for a great adventure!

(2) My second piece of advice is something we were told on our first day in the first albergue we stayed in. At the time neither of us realized the depth of its meaning or its importance. That being: to accept rather than expect. We only saw it after reflecting on the Camino, but it became clear that most of the problems we encountered were because we had expectations that either could not be fulfilled or simply were not fulfilled. As such, the problem was not with the Camino or the albergue or anything else, the problem was within us and what we had demanded from the situation. In talking with others we hiked with we have also seen that many of their frustrations and disappointments were because they too were expecting a specific result rather than seeing what was given to them in each moment. So many wonderful people who we came to know on the Camino were disappointed weeks in because they did not find a partner, a wife, a husband, or had not yet had all of their difficulties resolved by the hike. But in seeing the Camino through our expectations we missed experiences that we could have learned from. If only we had accepted rather than expected. Even albergue owners along the way talked about their frustrations with pilgrim's expectations - those who wanted a hike mirroring the movie "The Way", or to have a friend like Yost, make lifelong friends, find their life partner, have a jail experience, or find an eccentric residence host. Indeed one albergue owner said that given the pressures and expectations of the movie "The Way" many hostel operators who now considered "performing as the eccentric host" to garner that type of reputation and get noted in the Brierley guide as a "necessary experience". This too is unfortunate, since the reality is that there are characters in every hiking group, there are experiences to be had without the expectations and pantomimes which follow. If you accept the Camino for what it is including the challenges ranging from snoring bunk mates, to rainy hiking days, to tough climbs, you will find that new avenues of interest and adventure reveal themselves to you. Always remember that often the Great moments on the Camino and in life come right after the tough moments, you just have to be open enough to see and embrace them.

(3) Third and final piece of advice would be to remember that getting to Santiago is not the end all and be all of the Camino. Some people cannot finish the trek, some people get hurt, some people chose to walk away from the trail. All of this is ok! We all walk our own Caminos, if you can't finish it then there is a lesson to be learned there and you need to figure it out. Remember that the Camino is more about the voyage than the destination. By extension if you do get to Santiago, you'll likely realize that this isn't the end of the pilgrimage either. Some people go onto Finisterre or Muxia to continue their treks, which certainly would give you a geographic conclusion to this particular hike when you get to the Atlantic. Ultimately however remember, that Santiago is just a city, the Cathedral is just a building, and the Credential is just a piece of paper - all are beautiful and symbolic of your achievements but the key is to keep the spirit of what they represent alive everyday in your life. 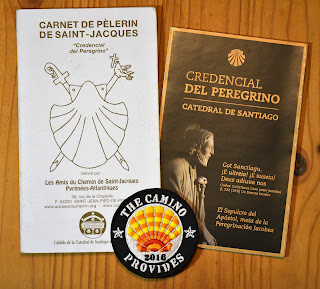 Thank you to everyone who has followed in our hike along the Camino Frances and our adventure! We hope you will join in following our other treks including:

For a sneak preview of some of the highlights of our trip, follow the link below to watch a 20 min slideshow of our walk from St. Jean-Pied-de-Port to Santiago de Compostela click here. 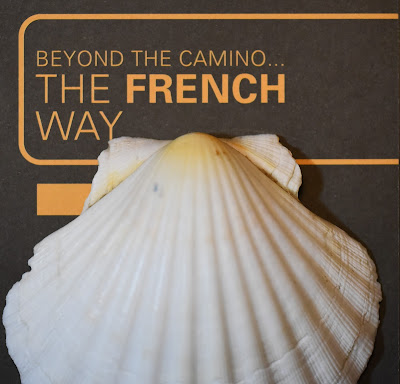 Sonya and Sean
Sean and I discovered a passion for hiking while at university together in southern Ontario, and we have spent as much time as we can away from our computers ever since, hiking, kayaking, travelling, and camping across Canada. My love of birds, nature, and the outdoors led me to a career in conservation, while Sean has transitioned into the world of freelance writing and landscape photography. While we both spend quite a lot of our working days in front of computers, we take every opportunity we can to get outside and explore, disconnect from the digital world, and recharge. We completed our first medium-distance hike in 2016, when we walked 800 km along the Camino Frances, from St. Jean-Pied-de-Port, France to Santiago de Compostela, Spain. We followed this with a 780 km hike along the Via Podiensis, from Le Puy-en-Velay, France to Roncesvalles, Spain in 2017. Since then we have trekked the Camino Portuguese across the length of Portugal, Ontario's Bruce Trail from Niagara Falls to Tobermory, and Newfoundland's beautiful East Coast Trail. Lately we have been planning our next big adventure ... 24,000 km along Canada's Great Trail !